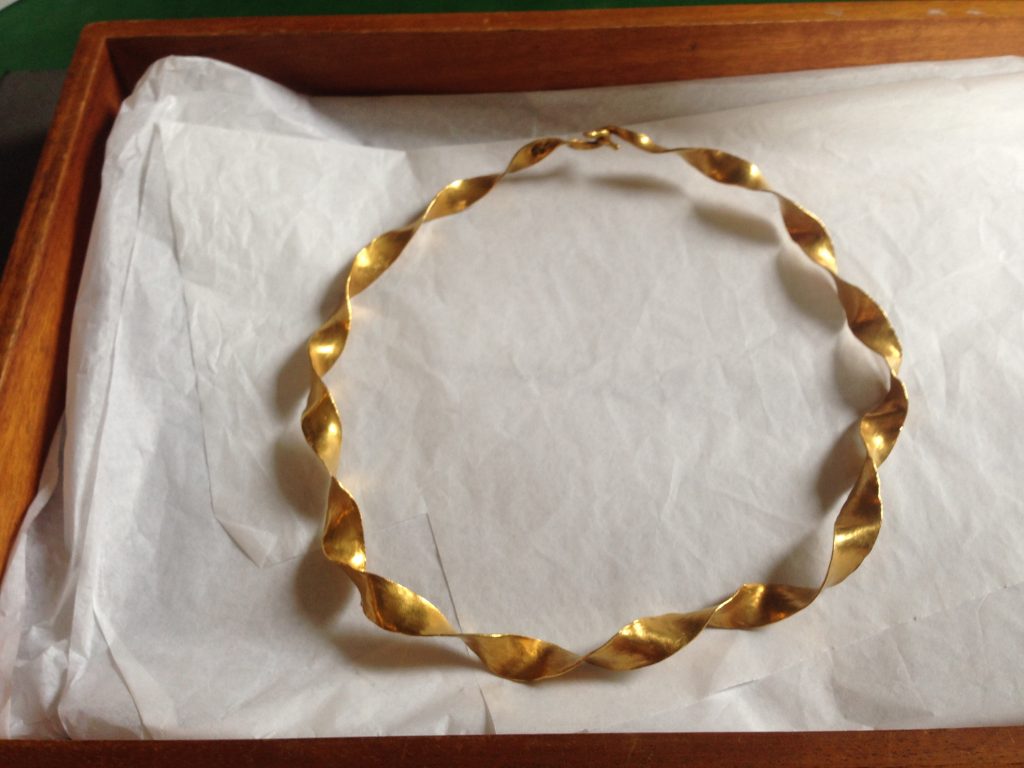 It was originally discovered in Culmore Swinford Co. Mayo in Oct 1868 by a group cutting turf at a depth of 2 metres. It consists of a flat ribbon on gold, twisted and ending in hooks and worn around the neck.

There is considerable debate regarding the dating of Torcs, but it is generally accepted that they date from either the Middle Bronze Age c. 2300 BC or the Iron Age c. 1300 BC.

The Swinford Torc originally belonged to a collection of a Mrs Ruth Faulkner Executor of the Estate of the Late Mr GT Lucas of Bentley Ashbourne Co Derry. It was purchased by the British Museum in 1873 and held there under Object Reference Number BCB62397.  It was exhibited in India in 1997/98.

This website uses cookies to improve your experience while you navigate through the website. Out of these, the cookies that are categorized as necessary are stored on your browser as they are essential for the working of basic functionalities of the website. We also use third-party cookies that help us analyze and understand how you use this website. These cookies will be stored in your browser only with your consent. You also have the option to opt-out of these cookies. But opting out of some of these cookies may affect your browsing experience.
Necessary Always Enabled
Necessary cookies are absolutely essential for the website to function properly. This category only includes cookies that ensures basic functionalities and security features of the website. These cookies do not store any personal information.
Non-necessary
Any cookies that may not be particularly necessary for the website to function and is used specifically to collect user personal data via analytics, ads, other embedded contents are termed as non-necessary cookies. It is mandatory to procure user consent prior to running these cookies on your website.
SAVE & ACCEPT